This is definitely long overdue, and with everything that has been going on, I definitely do want to mention this. Our Brother (in-law) gave me an opportunity.

What I can tell you is that it is an intense sport to watch, and I am betting an even more intense game to play.

I have known that Ben has played this game for the last year or so, and when I got an email from him, I was shocked, and super excited and touched by the opportunity he presented to me.

Ben sent me an email asking me if I would be interested in coming to his games and taking photos for them, the only thing he wanted to make sure is that I knew it was free.

Honestly, I have not been able to touch my camera. I have gotten camera shy.

I don’t think my photos are any good, and I don’t think that I have any talent whatsoever, so it has scared me.

It has scared me to have a camera in my hand, because what if I let someone down?

However, Ben has given me an incredible gift. He has given me a new kind of opportunity to put a camera back in my hand and get back to my passion and the thing that I love.

This blog is dedicated to you Ben. You are an awesome Big Brother, and I cannot thank you enough for getting me back to what is so me, and something that I have missed so much.

You should go over and check out more photos, and the game/players over at The Grand River Gargoyles website! If you are in the area for games as well, go check them out! They are great players and a great team and deserve a ton of support.

I have always wanted a brother – I liked the idea of a protector. I thought “If only one of my sisters was a brother, man what a life that would be!” – until I moved in with Cody and I had to start worrying about things I NEVER had to worry about because I grew up with all females.

Suddenly my world changed…no one prepared me, no one sat me down and told me that things would change.

Gone are the days of carefree midnight bathroom trips. Now when I wake in the middle of the night due to nature calling, I have to somewhat wake up to make sure that I don’t fall in BECAUSE IT HAS HAPPENED. I have cursed Cody’s name in the wee morning hours as I submerge my bottom half in freezing cold toilet water, and try to roll myself out of the toilet still half asleep. Then to stumble back up to bed, with a half drenched t-shirt which I will have to replace. I have now started to hide an extra T-shirt in our linen closet in the bathroom. But, you know what would be better? If I could remember that the toilet seat might be up, or better yet…if the toilet seat were put back down.

I didn’t grow up watching sports. I didn’t play any sports growing up.  The closest thing that was found on our television set was the Olympics when they were on, or figure skating on Sunday afternoons as my mom folded laundry. Now, I know that my life for 6 weeks will be football, which then overlaps into hockey and then there is short break until football starts back up again. It’s not that don’t enjoy them. Sometimes when the games are good, and it’s not a bunch of nonsense, I will watch and I might even get involved and throw around some terminology, all of which Cody lovingly puts up with, because I honestly know nothing and I am probably giving him more of a laugh than anything else.

There are beer bottles on the counter, in the living room, and sometimes in the bedroom, but Cody introduced me to the shower beer. Now this practice I have tried with coffee – it doesn’t work. Wine? Forget it. However, a nice hot shower with a cold beer has helped with the worst of days. I am not a big drinker, however this is one way of ending a horrible day that I have not regretted as of yet. Try it…trust me!

Being from a small town, on the main road, we get a lot of visitors. Some of them announced…and others not so much. At any moment in time I may have to dart from one room to the next without being seen because I don’t like wearing pants in my own house. No pants are the best pants. With my family and friends, 95% of the time there is a warning!

“Hey, Toni and Julia are coming over at insane o’clock to go running tomorrow, heads up!”

Cody’s warnings are more than likely 2 seconds prior to someone coming into the house, as Bacon is barking and I am trying to find a blanket or towel to wrap around me in order go find suitable visitor bottoms. 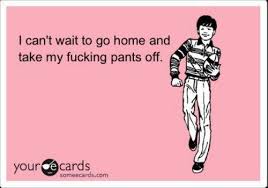 Why are there feathers?

Cody, as I have mentioned before, is a hunter, which means that at any given time there is some kind of wild game that I do not recognize in our freezer and during the fowl season, I may stumble upon a bag of feathers. I have learned to not ask questions, but rather to take advantage of the fact that Cody is out of the house, and I can watch every rerun of Friends and Sex and the City I can find.

Growing up with all females may have been intense every 4 weeks…but it also was a blessing. I learned how to cook, bake, clean, when to stay away and when to show up. At the time I was going through it I couldn’t wait to get out… and now that I am out, I miss it more than I could imagine.