What they don’t tell you, is when you have children you lose control over the screens in your house. You lose the ability to watch whatever you want whenever you want. Apparently, there are certain things that are inappropriate for children to watch. WHO KNEW?

This of course means that you get to watch awesome children’s programming…and by awesome, I mean “awesome”.

Now don’t get me wrong. There are some absolute wonders, like the Pixar movies, or my childhood favourite that is still running today, Sesame Street, but there are others that MAKE MY BRAIN BLEED. No, seriously.

Here are some of my least favourites that my girls LOVE (so far Isaac doesn’t have an opinion…THANK GOODNESS): 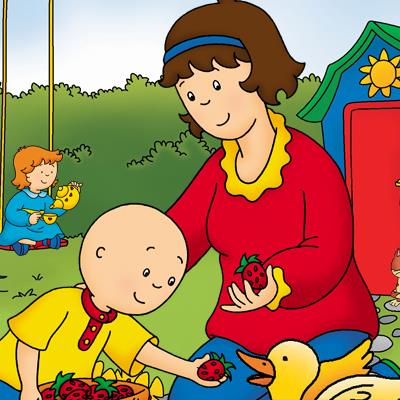 I don’t know which is worse – Caillou’s whiny voice, or his parents’ ridiculousness. Sure, Caillou is four and sure, he’s got a rough time of it with parents who never change their clothes and are creepily nice and sweet all the time, and sure, his sister Rosie can be a bit of a pain, but please. For the love of goodness. PLEASE. Stop whining. Just…stop. I seriously think a voice actor change would make all the difference in the world.

This show is nonsense. Not to say that other shows are grounded in solid reality (Oh, hi Octonauts, weird sea creatures that aren’t to scale!), but this show kind of takes the cake. There’s this royal family, with an absent dad (he’s on a crusade…you know, the super kid-friendly kind?), a neglectful mother (she’s NEVER paying attention to her kids…EVER), a boy-knight who terrorizes the town with his dragons and arrogance, and a sister-witch-in-training who is mega smart and deserves her own show. If it weren’t annoying, it would still drive me batty. Poor people of Glendragon.

If we can get past the ridiculous bodies and make up and name, it might not be such a bad idea to have a strong girl group hanging out together…except, they aren’t. They’re catty and vapid and rude and ignorant and…dumb. And the whole show is a big fight between themselves and another group of girls. It’s girl-on-girl crime, which is just awful. There’s enough female-competition in the world. We don’t need to teach it to our daughters at a young age. This show is actually not allowed in my house anymore. It’s pretty much the only one I really put my foot down about. 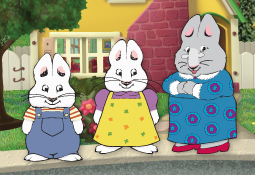 It’s easy to hate on this show. There is the nagging, Type-A older sister Ruby who won’t let her little brother have any fun. There is the weirdly one-word-at-a-time 3-year old Max, who just keeps repeating the same word over and over and over and over (get a sentence!). And there is the famous mystery: where the heck are their parents? Max and Ruby are a favourite for Lillian…but for me, I wish they’d go back to the bunny hole. Pronto.

And my absolute least favourite of ALL TIME:

Toopy is a dimwitted mouse who is full of himself. Binoo is a mute sidekick that is inevitably smarter than Toopy. Patchy-Patch is Binoo’s lovie. And that’s it. That’s the show. Then there’s annoying friends, like the wailing dragon princess whose cries sound like fingernails on a chalkboard, the unending adulation Toopy has for himself, and Binoo’s lack of backbone (at this point, I’m grateful for lack of voice). But…

…the girls love them. LOVE them. I don’t know why. The songs are ridiculous. The premise is ridiculous. The education value is nil at best. The annoyance level is high. And yet…they love it.

So this weekend when we were invited to a birthday party where THE voice of Toopy and Binoo, Frank Meschkuleit, would perform a Toopy and Binoo puppet show LIVE…we knew the girls would explode with happiness. And we were right. Frank was awesome, the show was brilliant (he called out every child’s name and made jokes for the adults in the audience, including a fart joke about Ben…no, seriously…), and Sophie and Lillian LOVED it. Sophie thought it was hilarious and awesome and Lillian kept looking back at us to make sure we were seeing what she was seeing. I’m fairly sure her brain exploded a few times.

Lillian and Sophie getting their photo taken with Toopy and Binoo!

I’m just grateful that Isaac was more excited about the diaper bag strap than Toopy and Binoo. I can still get away with watching The Social while he’s cruising around the floor.