Toni is away in Montreal on a spur-of-the-moment trip to visit her new nephew, Lucas. While we wait for her return, take a peek at this video that is both infuriating and crazy at the same time. Like I said, Learn how to park!

I nominate you as #yyc's #worstdriver! And yes, we have already started a hit and run investigation. http://t.co/IBbizh6PXC

To celebrate Jacqui’s monumental 1 year anniversary of being seizure free, her and I ventured into the great city of Toronto to have the incredible Alana Mule of Adrenaline Tattoo Toronto fulfill Jacqui’s wish of permanently marking the occasion.

During our journey there and as we got closer to the city, our language got more colourful, stress levels (and pee levels, to be honest) raised and the use of my horn became more frequent.

Between the drivers that clearly don’t understand that the fast lane is not for driving, the ones busier with their phones than the gas/brake pedal/steering wheel combination in front on them, the ones following entirely too closely, and the ones that plain should have never been given a license (EVER.), our conversation was quite comical and quickly became a running list of the ways you could use your horn.

Seriously though… how do they pass?!

1. Marking your territory: This use can be applied in two ways – a) to avoid the side-swipe- when a driver doesn’t check their blind spot and decides that the side of your car looks miraculously the same as the scenery and road and assumes it can drive there, the quick, yet firm pump of the horn wakes them up and reminds them abruptly to use their neck AND eyes when changing lanes and b) to let road bullies know that you are not going to be pushed around by their aggressive lurches towards your car and that you are in fact using the lane you are currently occupying in current space and time. Thank you very much.

2. Saying hello: I might be alone in this and even at the risk of sounding nerdy I will tell you that I get pretty excited when I see friends and family passing by or out and about while I’m driving. This use of the horn is one of my favourites – a few little taps to acknowledge that we’ve seen each other and maybe shared a smile that can brighten any dreary day. 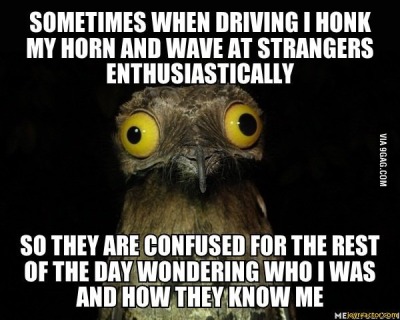 3. Expressing emotion…all of the emotions: The horn can be used when happy, sad, irritated, aggravated, hungry, helpful, mad, grumpy, excited, elated and especially pissed the fuck off. The problem is that the horn’s intent can often be misinterpreted – unless laced relentlessly, that one is pretty self explanatory – and is left up to the perception of the receiving or intended party. Due to the array of intents, I believe vehicles should come equipped with a range of tones and intensities. That way you can specifically say “eat it” to the jackass that wouldn’t let you in, yet somehow still ended up behind you – and he’ll know EXACTLY what you mean. 👍 win, wi…er… 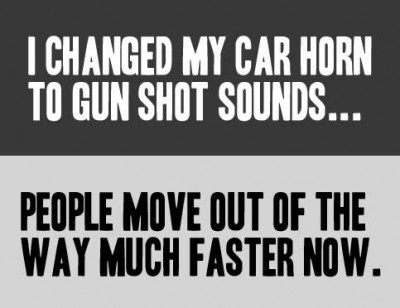 See?! I think this is a great idea!

4. Celebrating: Attending school in and then later moving to Cambridge, I quickly learned what the celebratory use of the horn was all about. While I have always been a soccer fan and supporter of Portugal in any Euro or World Cup, growing up in the country I  had no concept of the celebratory use of the horn in the true sense. Then I moved to my neighbourhood, which I lovingly refer to as “Portugalt” and when my national team won a game – hell, sometimes even tied one and mingia! You knew about it.

5. Speaking ‘big city’:  In a small town, even in a smaller city, you rarely, almost never hear horns honking, especially the quantity of horn usage that you do in cities like Toronto, Montreal and New York. It’s like the language changes between people and patience runs dry once you cross the border into a metropolis area and everyone there is pretty damn immune to it. I on the other hand still find it abrasive, annoying and for the most part neccesseary. I mean, I can understand one person honking at a person who is blocking a portion of an intersection, but all 50 people that have to edge around!? Excessive. 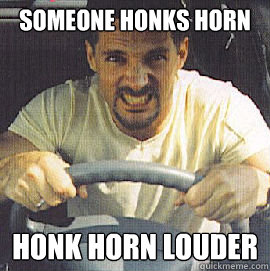 6. Announcing your arrival: This is one of those uses that I contend the appropriateness of. If you are old friends, close family members, best buds from back in the day, forever coworkers, etc., then YES, appropriate. If you are not as familiar with the person, for example you are picking up, say the woman you have only been dating a few weeks? Then, NO, absolutely not appropriate. Just ask Michael how this went for him… er, actually maybe don’t…

7. Providing a warning shot: Much like a warning shot in terms of fire arms, the horn warning shot rings the same message – “Your ass is about to get served to you personally”, whether that be a verbal schooling, or in the extreme cases, a physical altercation is about to take place, you may want to tread lightly if ever on the receiving end. 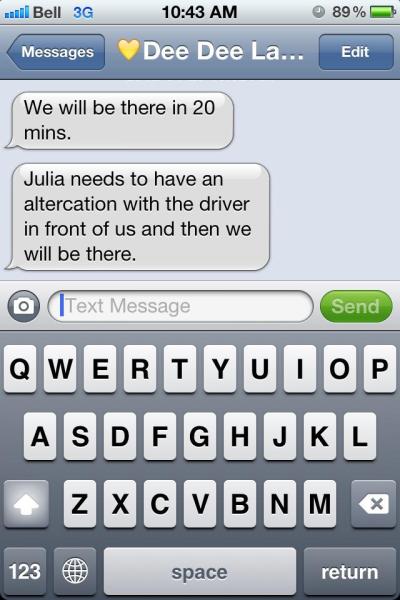 It runs in the family…