In our house, we are allergic to everything.

I am the most allergic between Ben and I, but even he gets a little runny and sneezy around dogs and cats.

Ben has a house rule: if someone (directed mostly at me) brings home something that we (again, mostly me) are allergic to, he will cook it for dinner.

And he’s really adamant and meticulous about keeping things that we (me) are allergic to away from us (me). I’ve only once been able to fool him into letting me have what should have been a never-in-a-million-years activity with a horse – we were on our honeymoon in Quebec City and they offer horse-drawn carriage rides around the Plains of Abraham. I told Ben that because we were outside and we were moving (i.e. there was a breeze), I would be more than fine. About five minutes into our tour, the lovely French tour guide said, “Madame, I’m afraid you might be allergic to my horse.” I nodded, while blowing my nose and wiping my eyes, and I said, “Maybe.” Ben was furious.

Ever since then his vigilance in keeping us (ME) away from all things allergen-filled has never wavered.

Now, you might have noticed that pets are quite popular among the Sisterhood. Toni has two sweet, giant dogs; Jacqui has two adorable breakfast-food/miniature dogs; and Andreah is cat-sitting. So, what the hey happened with me?

Short end of the genetic stick, I tell ya.

So, when events are held at either Jacqueline’s or Toni’s houses, allergy medication is taken, wooziness sets in, and all clothes, blankets, toys, etc. are washed when we get home. It’s just the way it is.

Through our pre-baby years of marriage, we were offered the chance to dog-sit a soft-coated wheaten terrier, a dog that is supposed to be hypoallergenic. We pocketed the offer and decided that after we had babies we’d consider it. We would hate to get a dog just to have to break-up and give away the dog because of allergies. That would be heartbreaking and a lot of trouble that could be avoided if we were just patient.

And then along came Sophie. Sophie who had an allergic reaction to the boxed rice cereal you’re TOLD to feed your babies as their first food. Sophie whose hands and wrists swelled up to more than double their size because we failed to wash a hand-me-down coat before letting her wear it. Sophie who gets licked by a dog and immediately gets welts on her skin. Sophie who can only have clothes washed in a specific kind of laundry soap or all hell will break loose. Sophie who gets itchy when she has too much dairy. Sophie, the queen of all things allergies.

Sophie clinched it – we would never, ever own a pet. Ever.

Or at least a pet that had fur. Or feathers.

But then…Sophie started asking for one. Asking why we couldn’t have a cat, dog, bunny, cow, horse, etc.? And when we explained that any and all of those things would make us sick, she would get heartbroken, which of course makes us (ME) a little heartbroken.

Yes. Yes we would get a pet.

We didn’t tell the girls where we were going and on Friday morning, a school holiday, we drove to the pet store and made the magic happen.

We knew we wanted a fairly hearty fish who would survive living in our zaniness with 3 under 6 being their owners. So we settled on a Betta or a Siamese fighting fish. The downfall with these? They have to live alone, otherwise they’ll fight the other fish, so we were only getting one fish, which means the girls would have to decide on ONE fish, not one each.

After narrowing it down, both girls picked their favourites – Sophie a beautiful red, purple and blue one, and Lillian a lovely multi-hued blue fish. We brought in some big guns for the tie-breaker- Isaac. We held both jars with the fish in them over the stroller and Ben asked him to pick one. Within seconds we had our fish (for the record, that will be burned and will self-destruct (I hope), Isaac picked Lillian’s fish). 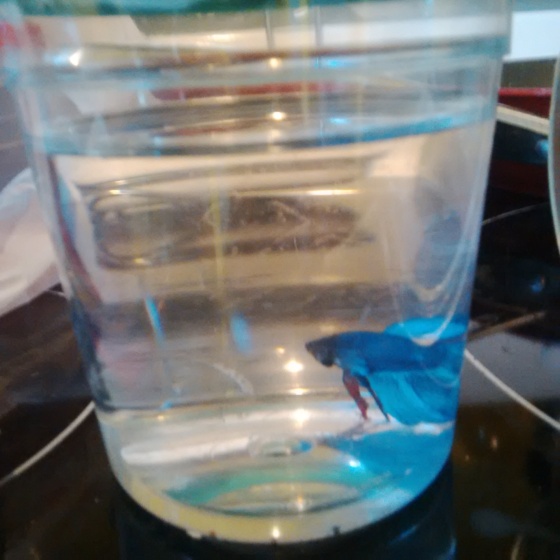 We bought a bowl, a net, some food, some water conditioner, the girls each picked rocks for the bottom, and Isaac “picked” a plastic plant. We were all set.

Once we got home, with the fish (and everyone else) in one piece, we set about getting our fish’s new home ready. Both girls opened their packages of rocks so we could rinse them off. 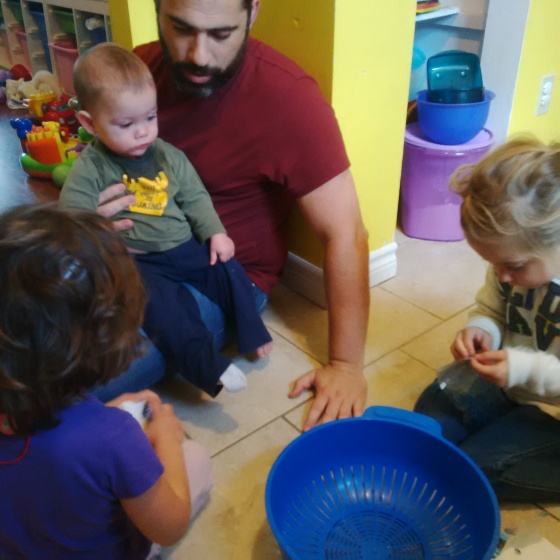 Next up, some lessons in sharing the sink.

And some lessons in not throwing rocks in glass house-bowls.

Isaac was super helpful during this process.

Isaac taking care of other business.

We double-triple-quadruple checked the water temperature and set up our fish’s new house, complete with landscaping. 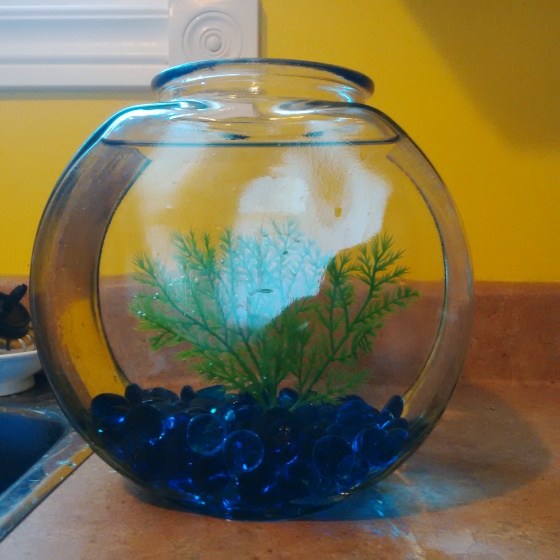 Some prayers, held breaths, and finger crossing, and voila! Our fish was swimming around in his new home. 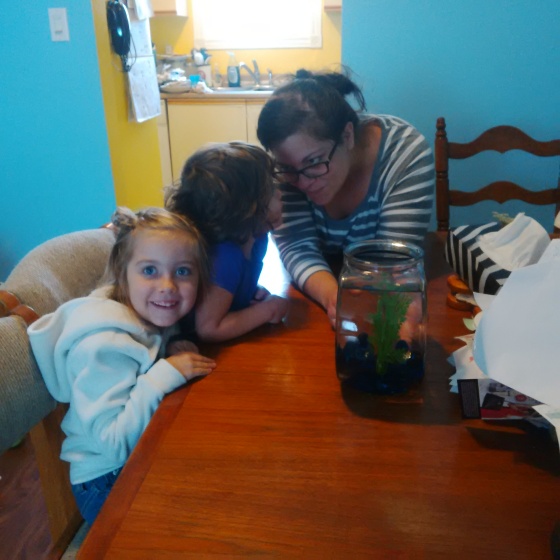 Now for a name.

We needed a democratic process because 4 out of 5 of us are very opinionated. Or at the very least able to articulate our opinions. (Sorry, Isaac.) So, over lunch, which the girls loved because we called it a lunch meeting ( so formal and fancy!), we each offered suggestions for our pet’s name.

Not sure if they’re all winners…

After careful deliberation, we narrowed it down to four selections: Blue, Optimus Prime, Superman, and Finn. How to choose?

We decided that as Isaac chose our fish, so he should choose the name. Ben came up with a simple process – give Isaac four blocks, each one representing a name. Whichever one he picks, that’s what the fish’s name will be.

Ben set up the test… 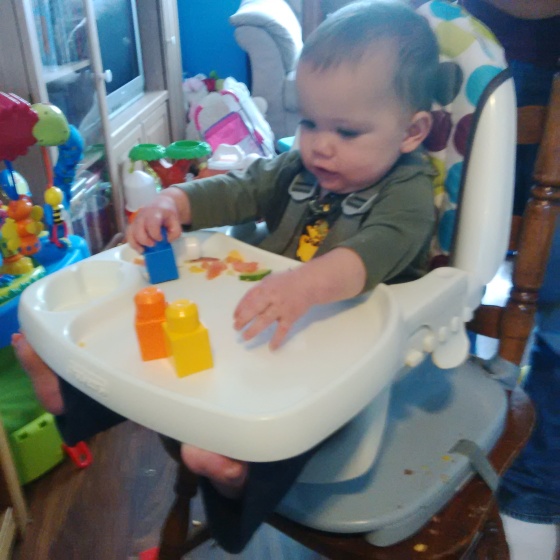 He grabbed two! Always the rebel.

And so, it is with great excitement, that we introduce the newest member of our family: Blue Finn.

I think it suits him.

It’s been three days and so far we haven’t killed him.

I think we’re off to a great start.